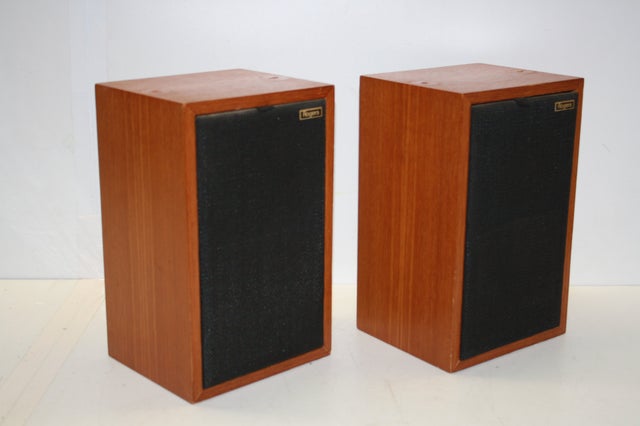 Vintage Rogers LS 35A 15 Ohm Monitor Pair - Please see photos. Famous BBC design - Made in England by Rogers - This is a very early serial number. Rogers made these from 1975 or so to 1987. Please see all photos.

For whatever reason, (Sonics is what I was told!) the last owner (where I found them) decided to mount these wonderful speakers, by suspending them from braded wires, in his studio. Hence the two holes on the top of each enclosure held two hooks. I remove the ugly hooks and will leave it to the new owner as to how best plug, or utilize them. Price reflects that defect.

History: The LS3/5A (each element pronounced separately, without the stroke) is a small studio monitor loudspeaker originated by the BBC for use by outside broadcast vans to ensure quality of their broadcasts. The speaker concept set out transparent and natural sound as the goal, and the achievement of the end result is widely acknowledged. The BBC granted licenses to a small number of British firms, who first manufactured the product in 1975. This included Rogers, who made the majority of the speakers sold.