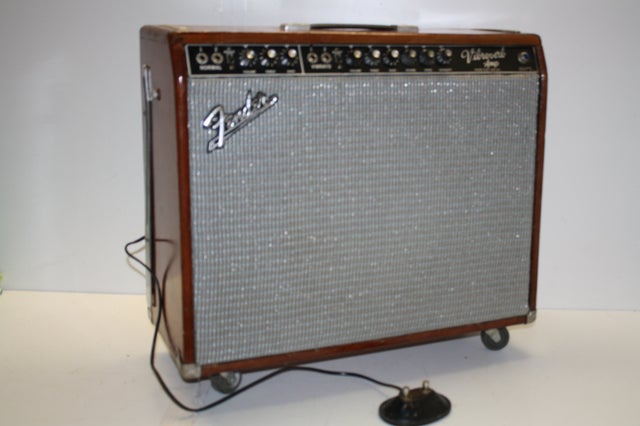 Fender Vibroverb Amp Pre CBS 1964 The AB763 circuit is considered by most to be the pinnacle of Fender amplifier design. This unit has been tested, and "works" and all functions work, but would require some maintenance to be considered fully functional. Pots need cleaned, etc. Has a single 15" Speaker. The tube chart inside the amp has the Letters NB (Feb 1964) and the chassis indicates "Fender Electrical instrument Company" as does the faceplate. Both would be consistent with the pre- CBS Amps. The chassis is stamped A01476 consistent with year 1964. So the amp is very likely 1964. The cabinet is stripped as shown in the photos. This amp does have the but has the Fender "tilt back" legs, that appear older. Reviewing offers.

2.) Transformers all appear to be original Fender numbers.

History: This amp was owned by a local musician for the past 30 years as best guessed by his surviving wife who kept the records. Recently the gentleman who serviced the amp for 30 years has also passed away. We do know it was rarely gigged live, and lived mainly in his home studio.

Condition: As shown in photos. The case is sturdy, with no Tolex, and shows its heritage. The back brace are still covered. The sound is very good but the controls all need cleaned. We are happy to plug it in, to verify operation. Bring your own guitar. Foot switch is included.