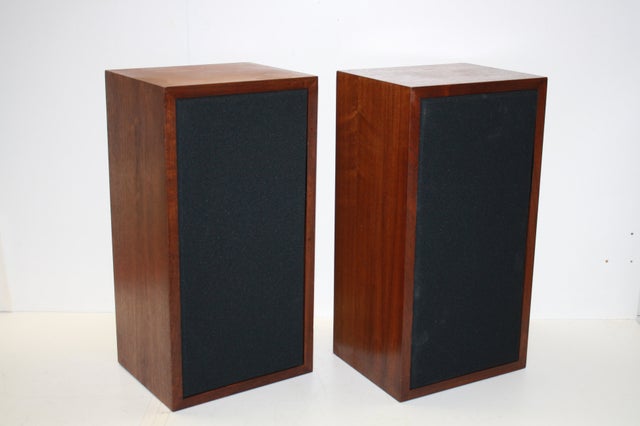 The EPI 100 loudspeaker is a timeless classic originally designed in the late 1960s. The EPI design concept was to create a woofer and tweeter that had similar efficiencies, and frequency response. To accomplish this, EPI set out to make their own speaker components.  A woofer was designed to roll off on its own at 1800 Hz. and the tweeter was designed similarly. A first order crossover was chosen as something to protect the tweeter from damaging bass frequencies, hence the incredibly simple use of a 10 - microfarad capacitor.

These speakers are the early first-generation typically referred to as EPI-M100. The M100 featured a tweeter built on a five-inch diameter Masonite® faceplate, with a treated paper concave dome. The voice coil was centered and cooled by four tiny pieces of foam and some silicone heat sink compound. This model stayed in production well into the 1980s, selling hundreds of thousands of units, and for years was highly recommended by many audio enthusiasts.

Condition: The speakers crossover capacitors were tested and found to be 100% functional and within spec. The 8" woofers have butyl rubber surrounds, and were replaced. The tweeters in both speakers have new reverse domes and are 100% functional. The front grills are new and were made from cabinet grade plywood with a beveled edge (see photos). Grill cloth is also new. The grills are not removable as were the originals. Both cabinets were treated and oiled. Overall the photos should demonstrate and represent the physical condition.